How should I transport my refrigerator?

Hello to all! Do you have any insight on the best way to transport a IH refrigerator? Many thanks.

I mounted 2x4's vertically in my trailer so I could support it down low and up high. Like Jeff said keep it upright.

Keeping it upright is best. But just for information, there's some exceptions for various reasons. Had to lay a few on their side while moving ( no pickup truck) in the past . Oil from the compressor moving around is the biggest issue along with how the unit is designed to take vibration. As long as it's not the back or front and it's not too long, just let them sit upright for some time before running it again , nothing should be damaged . Age and make can vary on all of it, so as mentioned , upright move is always the best , but........

If you have no choice and must to lay the refrigerator down, a box or something under the top part of the fridge propping the top to be higher than the bottom ( when you lay it down ) would also help keep the oil in compressor. When you get the fridge to the location you want it....keep the fridge in the up-rite position for at least the same amount of time that the refrigerator was laying down to help any oil in the lines to drain back into the compressor before plugging it back in...after the few hours are over, then plug it in and have a cold drink Don't forget to tape the shelves down inside the fridge and also to tape the doors closed when you attempt to move your refrigerator.All Monogram™ refrigerator models must, if transported in a vehicle, be in an upright position under all circumstances. An installer can remove the skid underneath without laying the unit down. However, it can be tilted back when placed on a dolly to take into the home. listed in the installation instructions included with the product.

When moving other GE refrigerators to a new location, we recommend the following: Turn refrigerator to Off. This should be done a couple of hours before moving to allow the evaporator time to defrost. Disconnect power cord from wall. Remove all foods and clean the interior. If the refrigerator is going to be in transit for more than a day, you may want to place a small bag of activated charcoal(such as used in fish tanks) in the refrigerator to absorb odors. Secure loose items, such as the grille, shelves, storage pans, ice trays, ice storage bucket. Covers and removable parts should be protected with tape - this prevents their coming loose and causing damage. If your refrigerator is on rollers, be sure it is properly secured in the moving van to prevent rolling and damage. The exterior of your refrigerator should be protected with a blanket covering. NOTE: GE does not recommend laying the refrigerator on its back. When loading the refrigerator in a moving van, truck, etc., it is best to keep it standing upright. 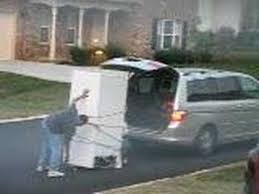 If laying the refrigerator on its side cannot be avoided, it is important to follow the above instructions on securing the components inside the refrigerator to prevent possible damage. When using a dolly or hand truck, always truck from the side.Possible damage could occur if trucked from the front or rear. Should it be necessary to lay the unit down, lay it on its side Lay it on the side opposite the hinges (on top and bottom freezer models) so the door will remain closed. Side by side models should be placed on the freezer side. That door is less likely to come open. Note: Exceptions are Monogram™, bottom-mount and compact models* - these must always remain upright! Important: If it has been necessary to transport the refrigerator on its side, it should be stood upright for an equal amount of time as it was on its side before plugging it in. If on its side for more than a day, leave standing for 24 hours before running. (If laying on its side just briefly to service, clean or adjust, just a few minutes of stand time will be enough.)

* Because of the design of the drain, compact models should be kept upright at all times to prevent drain water from running back into the appliance unless new out of the box. If it does have to travel on its side, turn it off a day in advance, and allow to drain.though it's not the preferred method of transport, it's OK to lay a refrig down for moving, even a R134a system, if you pay close attention to the refrigerant lines. where the suction line runs up into the freezer. This is the largest tube connected to the compressor, and is usually (though not always) visible running up the back of the cabinet. long as the refrig is laid down on whichever side allows this line to stay 'high', there'll be minimal oil migration, and when you arrive at your destination, just stand it upright for an hour or so and it'll be Obviously, the shorter the trip, the better. the suction line runs up the door handle side, just duct-tape the doors securely closed before you lay it down to keep them from opening and

All good info.
To answer the question a little differently, I used U-Ship when I purchased mine. The transporter moved it from New Mexico to Louisiana for $200.

Always upright, especially older refrigerators/freezers. Aside from all the advice about oil migration and refrigerant that has to settle; there's the issue of the internal compressor suspension in the hermetic units. These are the spring mounts for the compressor INSIDE the shell. Sometimes they can come undone if jarred while on it's side. It could be something as road shock or a pot hole to screw one up. That happened to a fellow IH'er. He said he was very careful and cautious when laying his IH frig on it's side. He did say the road was a bit rough. It had a 24 hour period before it was plugged in. Now it sounds different and doesn't work. An old appliance mechanic told me that the early fridges could have failure from rough transport cocking the compressor off it's internal suspension, think of sliding one through a window for example. It didn't happen often and the mounts have improved since then. Having done autopsies on dead compressors, I know what he was telling me.

I moved mine laying flat on its back and had no issue. Let it sit for days before plugging it in.

I moved mine laying flat on its back
Click to expand...

What's the point?? For crissakes we've been doing it wrong and I learned a better way and why.

Greg R said:
What's the point?? For crissakes we've been doing it wrong and I learned a better way and why.
Click to expand...

We've always been told to keep a fridge upright, laying it on it's side is wrong. That's nothing new to learn. Short of renting a truck some of us have moved them the 'wrong' way. Yes, they can be damaged but they will not instantly self destruct like we've been led to believe over the years. Like most things out there, there's only some truth to it. I would guess that moving it hundreds or thousands of miles is slightly different than a 20 minute ride in the back of a SUV. And one twenty minute ride in the backwoods is probably a bit different than the same ride through the typicle suburbs somewhere. Of coarse that makes me think of how many people tie a mattress or a xmas tree to the roof of a sedan with string , hop on the highway and do 75mph....LOL

Is it better and considered the right way to keep them upright? No question about that. Can they be damaged laying down? Yes, they can. Does it happen instantly and all the time? Absolutely not.

Just for something to think about, I wonder how many have been damaged while spending some time on their side compared to ones being damaged from being secured incorrectly while being moved upright in a pickup bed or even a moving van. Yes, oil movement and compressor mounting can be the issue. IIRC the new fridge we bought about a year ago had it zip tied with 'transportation' ties and I would imagine they are never on their side out of the factory so my guess would be they can be damaged in factory shipment as well. Maybe by being bounced up or down a staircase by some burly and careless delivery guys or in a truck going too fast over some RR tracks while in an upright position. Knowing what can go wonky with a fridge and being careful about those possible issues probably means as much as being too overly paranoid about the upright thing.
D

gillis51 said:
I moved mine laying flat on its back and had no issue. Let it sit for days before plugging it in.
Click to expand...

It's not when things work well that count the most; it's when they go wrong and could have been avoided.

Remember that we're discussing old, probably well-used units here. New systems tend to be cleaner inside when built, have different bearing materials, tighter clearances, and modern improved insulation on the wiring. They also don't have significant wear on any of those components.

Not only can oil get into the cap tube system and cause high pressures, but moving the compressor on its side stirs up the sediment too, and if that ends up getting into the compressor (by later settling elsewhere than the bottom), it can plug the system for good. Also, springs from those days don't have the fatigue strength and cycling ability modern alloys do, so the old, used suspension components Greg discussed, besides coming apart, can also break more easily than modern ones. I wouldn't tempt fate, if not unavoidable.
Last edited: Feb 27, 2021

obvious statements guys.
Move it as you see fit and as you can accommodate. Upright is best but if it’s laid on its side it may work fine as mine did or it may not.

Dana Strong said:
New systems tend to be cleaner inside when built, have different bearing materials, tighter clearances, and modern improved insulation on the wiring. They also don't have significant wear on any of those components.
Click to expand...

gillis51 said:
obvious statements guys.
Move it as you see fit and as you can accommodate. Upright is best but if it’s laid on its side it may work fine as mine did or it may not.
Click to expand...